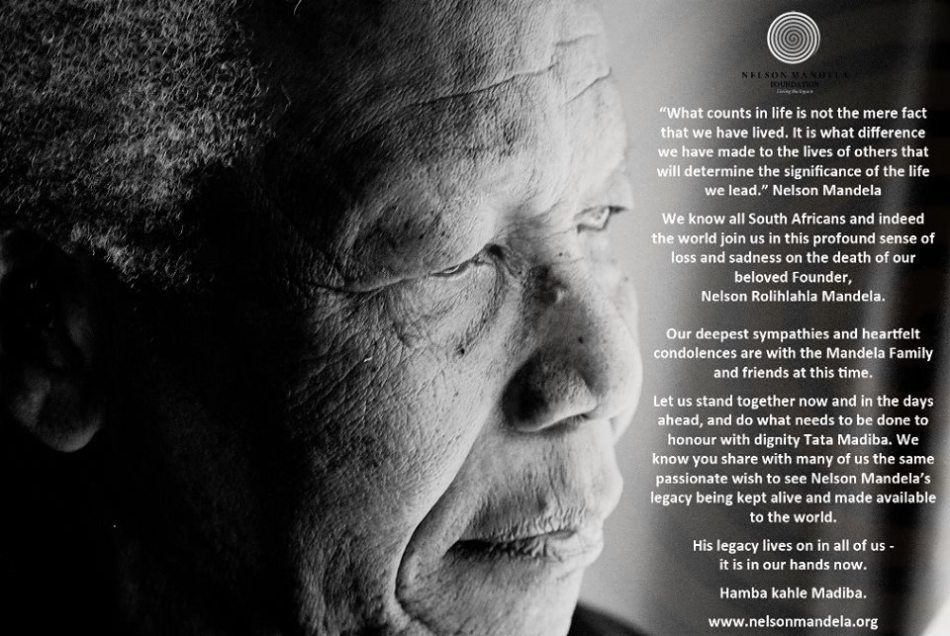 Where does one even start when attempting to pay tribute to a man so profound and mighty in almost all aspects of his life, a man who it must be said was sitting with the gods long before he died.

Many kind words, countless tributes (here and here to list a few), numerous celebrations of a great life, unprecedented reactions from across the world, even the critics have good things to say, all testify that the life of Nelson Mandela was that of a true legend, a behemoth of great leaders, an icon of peace and reconciliation, a symbol of forgiveness, definitely one of the greatest people to have lived on earth (probably the greatest person of our times so far). The measure and pedigree of greatness surely doesn’t surpass Mandela. His exploits inscribed on the palms of gods, this man belongs to a ‘club’ of a very few select widely adored individuals who walked the face of the earth, and exemplified to all humanity, selflessly, tender-heartedly, with gentleness and kindness, with wisdom, what humaneness, grace, love and leadership are supposed to be.

Mandela was a precious gift to the world, in all meanings of those words, and to say that the world didn’t deserve him is an understatement. He was too good a soul for a planet plagued by selfishness, greed, lust and jealousy. His imprisonment – one of the worst sins of mankind against humanity- played a role in the making of a great leader; the defeat of Apartheid – was a timeless act; a victory for all who opposed discrimination and hate at that time in South Africa, in our time today, and forevermore. Mandela belonged where his soul had always been, in the spiritual realm, sat contemplatively amidst the gods.

And before I continue, I must put behind me one small personal matter. I must rescind that email I sent to two people the week before last, expressing grief, in which I erroneously said I will never forgive what these people have done to me. That email was written in a thoughtless spur of rage driven by pain. Today, I’m a hint wiser, I acknowledge that I must forgive them.

Today also I’m wondering what would be the perfect honour for Mandela. An appreciation to Madiba, for all he was, for all he taught us, for all he did. A thankful recognition and gratitude from the whole world. After all we’ve calibrated our years with reference to the death of Jesus Christ (another great leader), we’ve named our days after planets, names which are derived from Greek mythology and Greek gods. Surely, while Mandela’s Catholic admirers will soon enough begin to debate whether Mandela should be revered as a saint or not, maybe it would be a much more fitting gesture to rename Monday, our second day of the week, after Mandela.

Without sounding sensationalist, I believe doing so will invoke his spirit each time we mention the day, and hopefully will remind us all of an exemplary life, which although not 100% infallible, was far gracious and selfless, more humane than most of us will ever be, a life on which to model our own fallible existence.

Personally, Mandela means more to me than just a global icon. When I was younger, I learned that my great grandparents on my mother’s side were originally South African (well, from the land that is now South Africa). They were part of the Ngunis who became the Ngonis that were dispersed north by the wars of Shaka Zulu, and who were led north by Zwangendaba. In fact I remember clearly that my late grandmother had the same type of piercings and wore the same type of bracelets which some tribes in South Africa still have and still wear till this very day. So South Africa was always ‘home’ to me, even when my passport specifies otherwise.

Thus, when I heard about Mandela’s death, just before 10pm that cold and rainy Thursday night in Manchester, a dark  haze immediately washed over my mind. I had been napping before I heard the news, and was awoken only to be quickly informed of the news. My mouth became dry, it felt like I had just been punched in the stomach. That afternoon, the winds had been unusually wild and forceful, and the MET office reported of an ‘Atlantic storm’ with gusts of around 100 mph hitting Scotland and  other parts of the UK, the strongest winds in at least 50 years. Even in Manchester, it was a sombre, chilly, dark and rainy day, with very strong winds throughout the afternoon.

The heavens must have been preparing for the arrival of a legend. The gods were about to recall one of their own. As Obama summed it up nicely:

The next morning, yesterday,  my thoughts were clouded as I recoiled from the news and media storm from around the world. Couldn’t think properly, couldn’t write much, couldn’t do much … a feverish numbness hovered about. It was as if some energy had been suddenly drawn out of me. A weird experience I know, but unmistakably a sense of loss, as if I’d lost a member of my own family.

And in some respects I had, we all had, because Mandela’s life has had a profound effect on my life, on the lives of my mother who raised me (The copy of Long Walk to Freedom which I own {and count as one of my most prized possessions}, was given to me by my mother), on the lives of many young Africans I know, and no doubt on the lives of millions others on the planet. A rare feat.

So, while there have been criticisms against Mandela (see here and here) even in death, the innumerable good far outweigh the few criticisms. And that my dear friends is probably why many of us will continue to draw inspiration from the life, deeds and words of Nelson Rolihlahla Mandela, and why I will never, ever forget him.

0 comments on “Mandela: A Tribute”