I’ll do something uncharacteristic today (not that I’m new to bending the rules).

I recently saw an interesting article on This is Africa’s website about Joyce Banda, and asked the author whether I could republish it on Malawi Ace. Thankfully, the author, Levi Kabwato – who I do not personally know, but have heard of – agreed, and I intended to republish his article in full. Except, I’ve decided not to republish it in the normal sense of what that usually would entail :-).

Not exactly, because I saw a comment below the article which in my view sums up the situation in Malawi rather nicely. Whether the comment – from one Bob Newman – is true or not is an entirely different story, however this comment – although short, carries some gravity and to quite a degree echoes some of the themes (e.g. complacency, [false]prophets, greed, extravagance, lack of assertiveness, inability to hold leaders accountable) I have been preaching on this blog. So, while I’ll include a link to the actual article, I’ve decided that it makes a lot more sense to publish the comment instead. 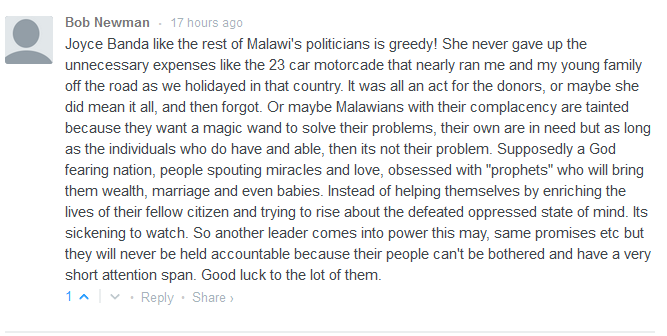 “Joyce Banda like the rest of Malawi’s politicians is greedy! She never gave up the unnecessary expenses like the 23 car motorcade that nearly ran me and my young family off the road as we holidayed in that country. It was all an act for the donors, or maybe she did mean it all, and then forgot. Or maybe Malawians with their complacency are tainted because they want a magic wand to solve their problems, their own are in need but as long as the individuals who do have and able, then its not their problem. Supposedly a God fearing nation, people spouting miracles and love, obsessed with “prophets” who will bring them wealth, marriage and even babies. Instead of helping themselves by enriching the lives of their fellow citizen and trying to rise about the defeated oppressed state of mind. Its sickening to watch. So another leader comes into power this may, same promises etc but they will never be held accountable because their people can’t be bothered and have a very short attention span. Good luck to the lot of them.”