Some things we will never understand while living on planet earth. Or rather, some things – as obvious as they may be to certain people – are hard to understand to we mere mortals. At least that’s what I think…this post is yet another reminder or confirmation why I deeply dislike the paternalistic and somewhat partial tendencies of big media houses and their masters. The hypocrisy stinks.

On the same day that Yoweri Museveni the president of Uganda was signing an anti-gay bill into law in Uganda, amidst an international flurry of criticism, with the usual suspects out in their legions (see another here), denouncing Museveni, calling him names, dictator, backward,etc (even Tutu compared Uganda’s bill to Hitler’s behaviour in Nazi Germany), conservative Christians in Arizona were celebrating the signing into law of a piece of legislation that allowed religious business owners to refuse service to gay people and “others” on religious grounds. Apparently, the Arizona bill is on the desk of Governor Jan Brewer of Arizona, and she is being pressured to veto the bill.

Yet strangely, unlike the personal attacks on Museveni, there were no personal attacks by the big media houses on the 17 state senators who voted in favour of the Arizona Bill. Nothing as strong was said against the Arizona lot, which to me is suspect. Even the Guardian page that carried the story (and I like the Guardian) which I saw looked more like the criticism on Uganda was personal on Museveni, whereas the criticism on Arizona was watered down, and not directed to any particular individual, let alone the architects of the Arizona bill: 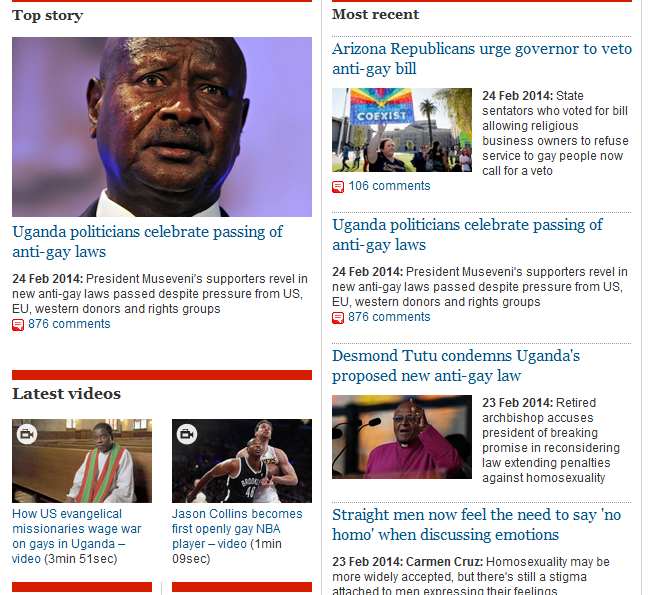 But that’s not all, there also seems to be economic threats. Norway and Denmark have withheld aid funds following the bill in Uganda, and there has been more than a single reference to the $400 million Uganda gets from the US. Remember how Hilary Clinton once said the US would use aid to effectively force African countries to implement laws protecting gay people? Well, this is a little bit like that,both in Uganda and even in Arizona. In particular, Governor Jack Markell of Delaware said: “the N.F.L. may be looking, or maybe should be looking, to move the Super Bowl out of the state.” In other words, if Gov. Brewer does not veto the “anti-gay bill”, then Superbowl, one of the biggest sports shows on the planet, with its huge pots of money, could, should, will relocate elsewhere. It gets worse, Barry Broome, chief executive of the Greater Phoenix Economic Council, was quoted in the above article to have said the leaders of four companies looking to relocate to Arizona had put his organization on notice, saying they might reconsider [against the decision to relocate to Arizona] if the bill became law. So there you have it, jobs and money to be lost unless the law is vetoed.

But what concerns me more is not the minor bickering. Firstly why criticise another’s country’s dirt, and not that happening in your own backyard? What has Obama said about the Arizona Bill, considering he has spoken against Museveni? Why have CNN or FOX been somewhat silent about it? They’ve not made as much noise in the way that they’ve attacked Museveni…or have they? They’ve certainly not attacked or attempted to tarnish the images of any of the Arizona state senators, in the same way that they have attacked Museveni (see another link here) and made him look like the bad guy.

Most African people I know are already sick of the paternalistic and hypocritical tendencies of politicians of western countries. They hate the media machinery which perpetrates views which portray Africa and Africans in a negative light, but characteristically ignores the scores of ills happening in western countries (or in countries which are considered ‘allies’). In the old days (pre-colonial and colonial) we were preached to about our primitive behaviour, we were preached to about witchcraft and black magic, and were called ‘savages’ and other unsightly terms.We were told to repent of all these ills and find God. These days we are preached to about poverty and corruption, about maternal health and disease, about democracy and education, and critically – about hating gays…

But doesn’t what is effectively a blackout on this Arizona bill just prove the same paternalistic, disparaging, patronising and dictatorial attitudes most of us are sick of, an attitude that sounds like thus: we think it is within our remit to tell you Africans what you should do and should not do. Isn’t this what is being indirectly communicated whether intentionally or not? Or I’m I missing something here?

I’m against any form of discrimination against minorities, whoever the object of that discrimination or marginalisation may be (I’m black and living in Britain so no surprises there). In the past, I have written in support of various minority causes on this blog and beyond. Further, I do in fact agree with some of the views written about the issue in Uganda. I even agree with this critique against Arizona, but only to an extent.

But I think if you are going to criticise Museveni or Ugandan politicians, who clearly have erred on this issue, maybe it would be prudent (and not only for journalistic value, but for the good of mankind) to be balanced in your criticism. Begin your charity at home, to equally criticise (and name, shame) in similarly strong terms, the list of the 17 state senators in Arizona who voted for the bill. Put them on the front page as you have done with Museveni. If that can’t be done, then there must be a good reason…otherwise, if that’s too hard, maybe you should try Saudi Arabia which like Uganda also has horrendous anti-gay laws, except unlike Uganda, homosexuality is punishable by death in Saudi Arabia.

Now that would speak volumes.