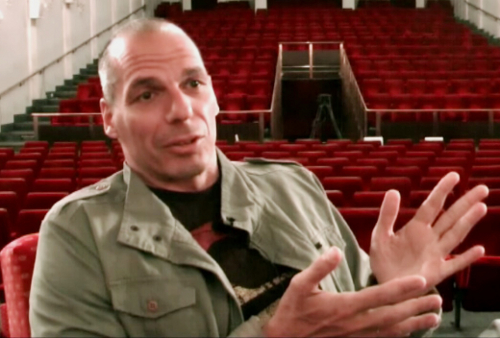 Yanis Varoufakis: Confessions of an Erratic Marxist /// 14th May 2013:

I must say after all the attention Yanis Varoufakis has received in recent weeks, this video is an interesting window into what is driving the man. Looking at recent events in Greece,  it’s easy to understand why Africans countries which have a narrow manufacturing, industrial and export base, and which are laden with debt, and often at the mercy of proponents of (i) austerity economics, and (ii) a predominantly market driven economy (as opposed to a policy incorporating both planned and market driven aspects), will want to pay close attention to what this man does with Greece.

And here are some reasons why:

(1) Because like Greece, many African countries have huge debts which they cannot currently pay off, without some drastic measures.

(2) Similarly, most African countries that have sought the help of the IMF have been force-fed the poisonous pills of austerity, and the effects are causing far more suffering, disproportionately so than any hint of remedial good that has been observed.

(3) Its been a while since, a sovereign country with an electorate backing has stood up to the large neo-liberal organisations that dominate debt and lending. Arguably, not since Hungary and Iceland showed them the finger have any other leader or government’s top money honcho openly expressed disdain against these organisations. But Varoufakis has done precisely that.

So, although the game African politicians play with the likes of the World bank and IMF is starkly different, Goodall Gondwe and his boss Peter Mutharika ought to pay very close attention to Varoufakis’s fiscal maneuvering.

1 comment on “Yanis Varoufakis: Confessions of an Erratic Marxist”