“This is where we are at right now, as a whole. No one is left out of the loop. We are experiencing a reality based on a thin veneer of lies and illusions. A world where greed is our God and wisdom is sin, where division is key and unity is fantasy,
where the ego-driven cleverness of the mind is praised, rather than the intelligence of the heart.”
— Bill Hicks

This post is a rarity for me because I don’t comment on such matters. But after reading it, hopefully you’ll understand why I’ve decided to write it.

If you are Malawian, then the chances are you know who ‘Prophet’ Bushiri is. But someone you may not know as well is another pastor who lately has been causing a lot of controversy on social media. For my own reasons I’ve chosen not to mention his name on this website, so I’ll refer to him merely as the Pastor.

So, it seems the Pastor got into an argument with another person (or a group of people) online, and began posting photos of him posing next to expensive cars, and big houses, and generally indulging in conduct characterised by exhibiting of his wealth (complete with challenges / rewards of thousands of Rands to persons who owned similar cars).

If it was an ordinary person doing that, surely no raised eyebrows would feature (why would anyone care?), but why would a respectable Faith Minister, a man who is a religious leader, to whom hundreds, possibly thousands look up to, and who quite a few regard as a ‘man of God’ go out of his way to flaunt his wealth? What had gone into him? Isn’t this in the same category as that woman who began ‘preaching’ with her breasts out… to appeal to a certain audience…??

Imagine for a second an old testament scene, whereby Elijah the prophet, fresh from his thunderous encounter on Mount Carmel comes into a market in Haifa, aboard a golden chariot, pulled by healthy and well-built white stallions. And upon disembarking, Elijah stands proudly in front of the villagers of Haifa, chin raised, chest pushed out, feet asunder, arms akimbo, posing for anyone who cared to marvel at his expensive chariot made of gold, a prophet of prophets who had demonstrated God’s miraculous powers with tangible heroic acts; here stands a man who God listened to; here stands a hero who has vanquished Baal and his prophets to smithereens, look how God had blessed him!

How unlikely is such a scenario?

For a man who despite all the evidence of the supernatural, didn’t command a single flake of mana to fall from heaven, to quell his hunger, but instead asked a poor widow to bring him a morsel of bread (the last food she had), believing in God’s miraculous acts of provision to sustain her, such a scenario on the markets of Haifa is most unlikely.

So, to say I was surprised when I saw the photos of this pastor is an understatement. And several other Christians I know expressed similar sentiments.

To put it all into context, there is a traditional and conservative Christian doctrine in most parts of Sub-Saharan Africa which implies that people who serve in various capacities as priests, Faith ministers or religious leaders should shun wealth, and live a generally humble lowly or at least unglamorous existence. At least until a few years ago, there was such a doctrine. Growing up in Malawi for example, this message was communicated to believers in various forms, including emphasizing that christians should strive to accumulate their ‘wealth’ in heaven (where moths cannot destroy it) by living an exemplary, godly and spiritual life here on earth; a life that shunned all manner of sin from alcohol consumption, theft, adultery…and suchlike, but instead sought after righteousness and godliness. I suspect that this doctrine in Malawi came from Christian missionaries who must have taught their congregations biblical stories such as the parable of the rich man and Lazarus (or Jesus’ parable in Mathews 19, whereby he said its harder for a rich man to get to heaven than for a camel to pass through the eye of a needle). So, its likely that they had a degree of influence in depicting material wealth as something which a christian should shun; an undesirable that was incompatible with a holy and Christlike lifestyle.

To an extent, one can understand their thinking. Many of the missionaries were of a traditional and conservative persuasion, people who did not descend from families of wealth, but instead found their roots in the Lutheran reformation. And so it is highly likely that they perceived excess and wealth with the lens of the puritanical religious standards of such movements.

What is not so obvious are the intentions behind such a message, considering that across Europe (where most missionaries originated) the Church was not only one of the richest establishment, owning vast swathes of land, but also occupied a privileged position next to the European aristocracy and their Monarchies.

But putting all that aside, I believe that material want has huge disadvantages for a society like Malawi, not least that when already disadvantaged and maligned people become desperate, many can be pushed to commit offences – a situation that is clearly not desirable.

So, even though the traditional notion of the pastor or priest being a shepherd of his/ her flock is equally valid for most christians, I don’t believe pastors should be poor in that they struggle to conduct the affairs of their households due to lack of money / resources. Indeed one reason for tithes and offering is to help priests, as informatively outlined here by one Richard Wayne Garganta, when he says

The church under agrarian law tithing had specific social, communal responsibilities as a matter of law such as a percentage being used to meet needs of the poor. [Deuteronomy 14:28-29 2 Chronicles 31:14-15 Nehemiah 13:12-13]  The church also, in some cases, gave pensions to certain members. [2 Chronicles 31:16-18]  The communal use and distribution of tithes was for the Levites, priests, stranger, sojourner, fatherless and widows. [Deuteronomy 26:12 and Deuteronomy 14:29]  ….

But is it right for a pastor to flaunt their wealth?

In the first Epistle of Paul to Timothy, we are told in no uncertain terms, in chapter 3 that:

…If anyone aspires to the office of overseer, he desires a noble task. Therefore an overseer must be above reproach, the husband of one wife, sober-minded, self-controlled, respectable, hospitable, able to teach, not a drunkard, not violent but gentle, not quarrelsome, not a lover of money. He must manage his own household well, with all dignity keeping his children submissive, for if someone does not know how to manage his own household, how will he care for God’s church?

For if someone does not know how to manage his own household, how will he care for God’s church?

Not many of you should become teachers, my brothers, for you know that we who teach will be judged with greater strictness.

For those of us who identify with Christian values, at what point does the commandments of Jesus and his disciples become muddled with the pursuit of wealth/ personal gain?

I’m not a religious scholar so I wouldn’t give you a definitive answer, but after reading verses such as can be found here http://www.openbible.info/t…/pastors_authority_in_the_church, it’s clear enough not to leave me conflicted. I get the sense priests and pastors must be meek, humble, respectable … and generally above reproach. It seems the standard or threshold with which they will be held accountable – by God – is much higher than that of us non-ordained folk.

I don’t know the pastor in question on a personal level, and its possible he is a genuinely good and humble man, but after all the noise made about him on Social Media, including on Facebook, and after seeing the posts of him proudly posing next to expensive cars (as if to say look at me I’m rich, I’ve made it), I’m somewhat lost for words.

Is it that he doesn’t have the right advisers, was his account hacked, or is his judgement really that flawed – so much that he can’t see the repercussions of his actions? Because such actions couldn’t possibly be in line with the word of God as laid out in the Bible – whether you read into them directly or otherwise. There may not be anything wrong with him amassing wealth, but flaunting it has no theological justification to stand on??

Frankly this is something you expect Kanye West, Rick Ross or some other excitable rapper to do. You don’t expect Kenneth Copeland, Billy Graham, Joel Austin, Joyce Meyer or T.D Jakes to do such a thing (not that these Christian leaders are blameless, perfect, or even my standard of uprightness).

But why does it even matter?

Because it doesn’t really give the right impression of religion, African pastors in general, or even of African people to outsiders/ unbelievers. And it erodes the important values in a society.

Well, what message does it send to his congregation, or to society at large? If a 15-year-old member of his church, a young girl saw those pictures, and read those posts, what message will she get from it? Will they get a positive message about a man who was doing the work of God?

What about an aetheist who sees those pictures, what will they think?

I hope this post will not offend my readers but this is not an unwarranted criticism. I’m just wondering whether such behaviour on the part of an influential man will ultimately help those who follow and listen to him. On a continent with so many poor people, most of whom are vulnerable and look to religion as a source of inspiration, their sustenance from the stress and deprivation in their communities, a religious leader should be a uniting force. 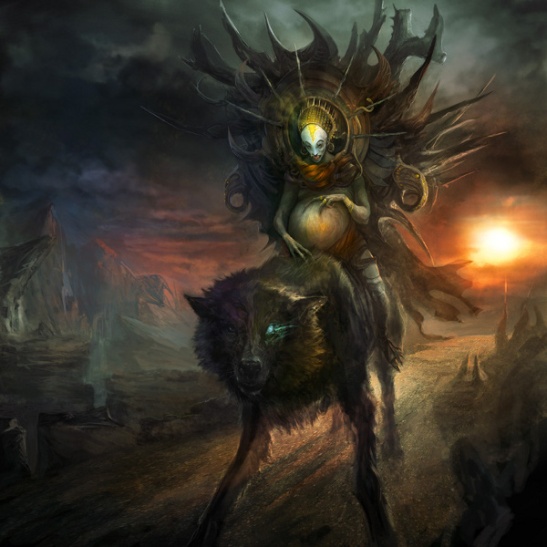 Depiction of Mammon – Copyright of http://www.kirsisalonen.com

On a different note, doesn’t such behaviour reinforce a consumerist narrative in society – that says what’s important above everything else is riches and wealth? An attitude that encourages individualistic attitudes, fueling greed, and selfishness, as opposed to love, kindness, inclusiveness, sharing and working with a communal sense of purpose? Doesn’t it diverge from the doctrine that the church is the body of Christ.

At what point does the gospel of prosperity become the worship of Mammon?

Isn’t all this similar (on a micro-level) to what David A. Stockman, in his New York Times Best seller The Great Deformation: The Corruption of Capitalism in America  calls ‘a rogue central bank that has abandoned every vestige of sound money…Turning Wall Street into a reckless, dangerous, and greed-riven casino..’ . That those who should have known better, those who had the knowledge, and were entrusted with responsibility, created a monster.

What about the virtues of community, of family and charity, helping one another,…. of righteousness. What Jesus talks about in Mathews 5… where is the space for that when your pastor is posing next to limousines?

I think in our countries across Southern Africa, where people are struggling with poverty, bad governance, corruption and suchlike, ‘men of God’ (who often wield a lot of influence) should behave responsibly. Using their gifts and resources not only to help their flock become financially independent (which I admit may require a degree of motivation), but to heal and ‘set captives free’, and ensure that they are wholesome in other aspects of their lives. This is important so that their followers can contribute positively to society. That to me is befitting of the duty of a servant of God, and if you look at St Paul, and his epistles… such seems to be a considerable part of his message to the church.