Airports and their importance to Economic growth – lessons from Mozambique, Switzerland and Norway

The images above show sketches of the new Nacala International airport  designed by Brazilian Architects Fernandes Arquitetos (who own the copyright to the images)  [More here]. According to the above Wikipedia entry,  “Once the airport is open people will not have to go to Maputo to get in to the country “. In other words, this will open up the North of Mozambique to the world, essentially removing the bottleneck that necessitated international passengers travelling by plane from the North, to go all the way to Maputo, which is ~1500km South west of Nacala, even when such passengers were destined for the north part of the country.

The impact of such an upgrade must not be underestimated. According to Laurie Price, Director of Aviation Strategy at Mott MacDonald, airports not only create employment and act as business getaways, but they are the main driver for tourism growth. He goes on to map a graph that lists aviation trips in countries in terms of their Propensity to Fly against Economic Strength (GDP).  Norway, a country with the highest Human Development Index features at the top with the highest propensity to fly, and interestingly, the highest GDP: 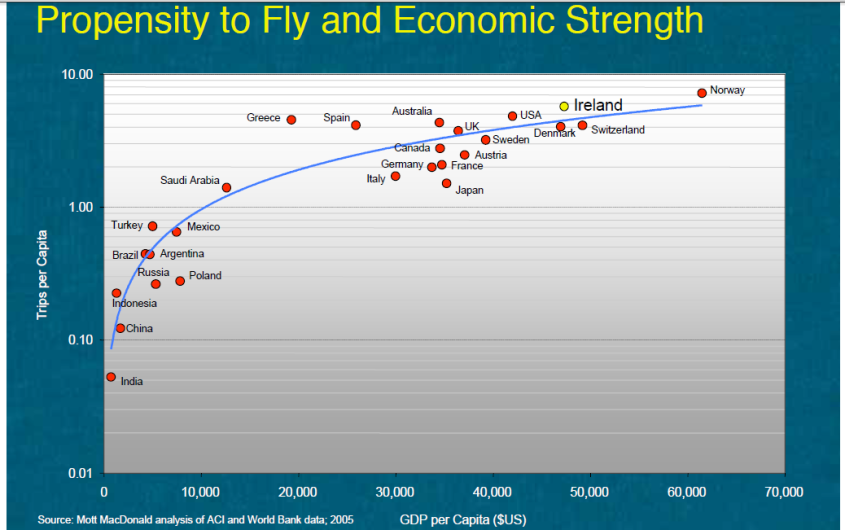 He also makes reference to  an Air Transport Action Group (ATAG) September 2005 study that revealed that “25% of all companies sales are dependent on air transport.” and “70% of businesses report that serving a bigger market is a key benefit of using air services.”

While the links between economic growth and air transport may not be welcomed news for the pro-green lobby who would have us each drive a Toyota Prius (or better, not drive at all),  similar views as those of Laurie Price have been reflected elsewhere; James Cherry, President and CEO Aéroports de Montréal, called airports

“..economic engines and most of all a reflection of the communities they represent “ [See here]

He gives an example of Canada where he says

“… airports generate an estimated $34 billion in economic activity and are responsible for 300,000 direct and indirect jobs “

This probably suggests that a thriving air transport industry that interconnects a country to the outside world is essential for economic development. For landlocked countries not receiving supplies directly via their own ports, one would imagine that the air transport industry (including Cargo services) becomes a much more crucial factor to their economic activity.

Looking at the airports of the countries on the above graph, it appears that most countries with thriving tourist industries either have an extensive airline communication network or have many international airports within them, for some an  international airport connecting each of their major cities (or tourist centres) to the outside world. Even Switzerland, a landlocked country smaller than Malawi in size (at  15,940 sq miles – roughly one-third of Malawi’s total area [~ 45,560 sq miles]) has at least 7 airports that appear to be international airports, with flights by the local carrier serving over 70 destinations in 38 countries.

The Mozambican project was made possible by a loan of $80 million from the Brazilian government via the Brazilian development bank, Banco Nacional de Desenvolvimento Economice Social (BNDES), as part of a $300 million credit line opened up to support projects in Mozambique.

While the airline industry in southern Africa currently appears chaotic and in tatters, with Malawi having recently flogged 49% of its airline to Ethiopian airlines,  it may be time to try different tactics. When some people have complained of unfair treatment and lack of understanding [See the sad story of Nyasa Express here] on the part of Malawian politicians regarding opening up Malawi to international travel, it would probably be wise, in my view to reconsider this issue, and abandon protectionist measures.

If Mzuzu airport, Chileka airport in Blantyre, Karonga airport and Salima airport were expanded and upgraded, to handle international flights, following a similar approach to what has happened in Mozambique with Nacala airport, it is not inconceivable to see how such measures  would create employment, begin to stimulate industry, attract investment and open up the Malawi to global trade.