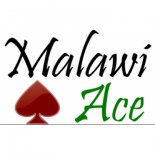 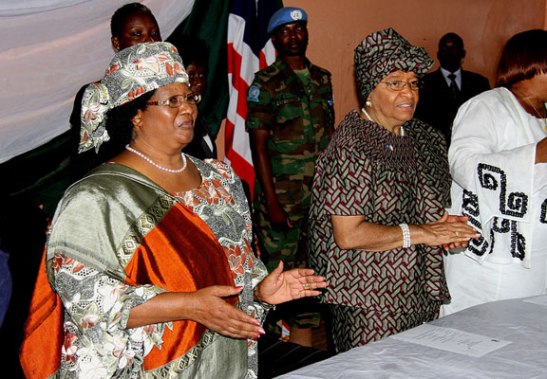 If you thought the verbal missiles flying between the Malawian President Joyce Banda and several prominent women in Malawi (Seodi White and Jessie Kabwila to name a few) was a phenomenon unique only to Malawi, think again.

In recent months, the Liberian president Ellen Johnson Sirleaf has also been on the receiving end of criticism by a woman she is well familiar with. Arguably one of her staunchest critic, Leymah Gbowee, the Nobel Peace prize laureate with whom Sirleaf shares her Nobel Peace Prize resigned last October as head of Liberia’s Truth and Reconciliation Commission, citing Johnson Sirleaf’s failure to combat corruption in government as one of the reasons. Further, she questioned why the president’s sons had important official jobs in Liberia. Gbowee said Sirleaf’s sons needed to be swept out. Singling out Robert Sirleaf, a senior adviser and chairman of the board of state-owned National Oil Company of Liberia Gbowee said:-

“This is wrong and I think it is time for her to put him aside,” Gbowee told the BBC. “He’s a senior economic adviser, and that’s well and good, but to chair the oil-company board—I think it’s time he stepped aside.”

An account on the Guardian puts it as follows:

While the criticism might come as a surprise to the international community, it’s nothing new in Liberia. “The issues raised by Gbowee are discussed in every sector of Liberian society,” said an official with an international NGO operating in Liberia, speaking to Daily Maverick. “There have been public outcries for months if not years that all the top positions in the government are friends and family. Corruption has overshadowed the country. And the gap between rich and poor is huge. Cabinet ministers have monthly allowances of $30,000 per month, while the average civil servant makes $100.”

This is not the first time Sirleaf has been criticised for her inability to tackle corruption. Despite her many accolades as a beacon of hope for Africa and women’s’ rights, her first term was littered with corruption scandals (to scratch the surface see here and here ) and indecision over corrupt figures in her government. One account reads:

Then, [Charles] Taylor’s presidency became a case study in kleptocracy and warlordism. By political necessity, the transitional government that followed, preceding Sirleaf’s administration, was made up by many of those who made money during the Doe and Taylor years. Even some members of Sirleaf’s government retains shady figures from the past.

Her 2011 re-election was very much in doubt such that the election was decided by a runoff in which her main opponent boycotted, leading to claims that she did not have a clear mandate; that she won by default because the voters of the other candidate never showed up.

Her Cabinet reshuffles have been criticised as superficial:

Minister of Agriculture Florence Chenoweth, for example, was spared despite being deeply implicated in a scandal regarding the questionable manner in which 25% of Liberia’s land and 40% of its rainforests were sold off to foreign logging companies….

Even the awarding of her Nobel prize just days before presidential elections in Liberia in 2011 didn’t go through smoothly, and was criticised as a political move by hidden forces attempting to win her political support; some have even called her a puppet forced onto the Liberian people by imperialist powers…

And fighting back she has, being quoted in 2012 to have said “she [Leymah Gbowee] is too young to know what we’ve done to reach peace and security in our country.” a statement which in my view hints of ageism, a bias not entirely desirable in a political leader.

In some respects Joyce’ Banda’s experiences as Malawi’s leader are not too dissimilar to those of Ellen Johnson Sirleaf as Liberian president. Like Johnson Sirleaf (who came to power after 23 years of war had devastated Liberia), Joyce Banda inherited a broken country that was on the brink of collapse as a result of Bingu Wa Mutharika’s troubled relationship with donor countries. While Malawi’s condition was a lot less severe than that of Liberia, Banda came to power when there was little forex in the country, and many services had been crippled; when foreign companies had pulled out (or were threatening to pull out); when there was shortage of sugar – this happening in a sugar exporting country; there were water shortages, and even the main brewery in the country scaled down operations (this was happening in a country which has a 360 mile long fresh water lake!?!); when teachers were on strike, the civil service including the police and lecturers hadn’t been paid for months (and the police were told to fend for themselves); corruption was commonplace; the price of fuel had gone through the roof and there was severe fuel shortages; prices of goods were increasing uncontrollably, there were demonstrations on the streets, and police brutality had killed at least 19 civilians and injured 58…

One and a half years on, while the situation has significantly improved from those turbulent days, most people agree that Joyce Banda’s honeymoon is long over. It is time for the president to show real leadership and put in place genuine policies that have a realistic chance of transforming Malawi. There is increasing frustration amongst many Malawians that the Malawian president has done too little to improve the lives of ordinary Malawians, and that nepotism (hiring family members to serve in government – the president’s sister was appointed as Principal Secretary in the ministry of Education) continues to be rife. There is a general feeling of discontent in some quarters that only people in government (or those who have connections with them) are truly benefitting from her presidency.

The president has publicly attacked unmarried women, and fuelled a spat with the above mentioned female activists. Further, like Johnson Sirleaf, there is concern that the president has turned a blind eye to corruption inside her cabinet, whereby several members of the government (including senior ministers) have been implicated in corruption scandals but have received no flak, and have not been prosecuted. In addition, there is growing concern that just as during Bingu Mutharika’s era the presidency was too close to a handful of corporations, Joyce banda’s government has been criticised for being too close to certain companies and corporations, in one instance the president was pictured clothed in attire having the logos of a local private bank –which had donated K28million (~£52,000) to one of the president’s initiatives. Then, there is the issue over the independence and competency of the judiciary – as the old legal maxim goes

there are several high-profile cases (including several corruption cases) pending in the Malawian courts, which appear to be dragging through at snail’s pace, with little or no sign as to when a decision will be issued. Some observers state that this is unconstitutional and with good reason believe that the president has not done enough to ensure that justice is served promptly on such cases, or that any obstacles (be they shady judges or otherwise) are set aside from obstructing the course of justice.

In Education , and despite some glimmers of hope, there is concern that the president has not done enough to increase the standard of education in the country. To build more Universities and technical colleges to equip the large number of unemployed youths with skills necessary for vocations such as entrepreneurship or commercial farming.

Talk is also rife that Joyce Banda’s son, Geoff Kachale, raised eyebrows over the apparent quick and sudden accumulation of wealth he is said to have acquired. Further, according to Face of Malawi, there are reports that the man has been putting pressure on some parastatals to award him contracts, or suffer consequences. Whether this is in fact true or mere speculation is anyone’s guess? Similar to such allegations is another allegation that Mr Kachale imported a large number of trucks into Malawi, a few of which are now being used by Mota Engil…??

Add to that poor judgement (Madonagate, South Korea labour fiasco (more here), selling presidential jet to buy maize); the wasting of public resources (e.g. The president’s excessive travelling [with too many members of cabinet – all of whom claim allowances], Facebook fiasco – wasting unjustifiable amounts of public money to create a personal Facebook page); her troubled relationship with the media; carrying hard cash to distribute to rally goers; Refusing to disclose her assets; getting ‘cosy’ with Mugabe (more here); and like Johnson Sirleaf, Joyce Banda promised to repeal Malawi’s anti-gay laws, but has yet to make good on her promise…

Finally, there is also concern that most of Banda’s policies lack sustainability and potential for long-term wealth creation. Many of her widely publicised activities involve giving maize handouts, giving free money to supporters, distributing  blankets or livestock and such menial tasks that can be entrusted to a junior minister or low-level civil servant. They are mostly hand to mouth initiatives, and could never help Malawi achieve economic independence in the ways that other countries globally have done in the past.

However, unlike Joyce Banda, who is known to have travelled far and wide in an attempt to attract investment into Malawi, some of the achievements of Johnson Sirleaf are quite remarkable. Prue Clarke and Emily Schmall write in the dailybeast:

… Johnson Sirleaf deserves credit for some stunning economic achievements. The Harvard-educated (Kennedy School of Government, 1971) president used her credentials as a former World Bank and Citigroup economist, along with a mighty dose of charm, to persuade Liberia’s creditors to write off nearly all of the country’s crushing foreign debt. International investment in industries like oil exploration, iron ore, and palm oil has soared from nothing to $19 billion, much of it from emerging economies of India, Brazil, and China. Government revenue has grown 400 percent.

But while there have been many poor decisions, and lack of sustainable policies with developmental potential, Banda has been in power for just one and a half years now,…which may not be sufficient time to roll out a real developmental agenda. With the pressure of running a country, and elections looming in 2014, now may be the last chance for Joyce Banda to try to get things right.

Most foreigners who visit Malawi temporarily don’t get to see the real drama played out, and leave the country singing praises, a good example here are Tony Blair and Clinton, who promised to help Malawi fix its problems. However, for those who stay a bit longer to properly study the dynamics and  observe the course of things , they soon get to see the real deal